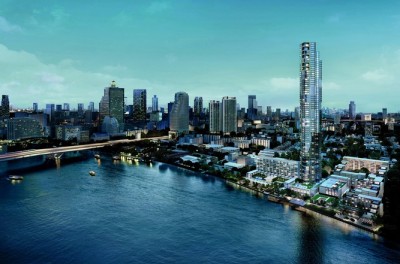 Hong Kong (Hong Kong SAR, China) – April 30, 2015 – The international launch of the new Asian waterfront luxury benchmark, Four Seasons Private Residences Bangkok at Chao Phraya River, is set for May 2-3, 2015 at the Four Seasons Hotel Hong Kong. An entire weekend has been given over to private viewings from 11am to 7pm on both Saturday, May 2 and Sunday, May 3 in the Four Seasons Hong Kong’s Victoria 1 room, in anticipation of strong interest from Hong Kong investors in a project that is set to raise the bar on luxury waterfront living in the region.

Four Seasons Private Residences Bangkok stands head and shoulders above other new residential luxury riverfront offerings, at the vanguard of a recent surge in waterfront development in Bangkok that has seen the River of Kings begin to reassert its rightful claim to being the Thai capital’s true heart and most valuable location.

The international launch of the project comes two months after its launch at a glittering gala evening at its on-site riverfront Sales Gallery in Bangkok. The Hong Kong private viewings will provide prospective buyers with a sense of the floor plate unique location, setting and scale and offer insights into the opportunities to make strong capital gains and/or rental returns.

The Four Seasons Private Residences Bangkok are part of a larger vision that also comprises the Four Seasons Hotel Bangkok at Chao Phraya River as well as the ultra-luxury Capella Hotel Bangkok, each set to take their place as iconic landmarks on the longest waterfront promenade in Bangkok, covering 35-2-68 Rai (approximately 14.2 acres) and 350 meters of river frontage. The development has been unveiled as Chao Phraya Estate and is Country Group’s largest project to date, valued at 32 billion baht.

Mr. Ben Taechaubol, Chief Executive Officer of Country Group Development PCL, said: “We are proud to be collaborating with Four Seasons to develop one of Bangkok’s most iconic hotels and private residences. Through our work with Four Seasons, our aim is for Chao Phraya Estate to redefine the waterfront experience in Bangkok and Asia.”

Owners and residents would also have privileged access to the neighbouring Four Seasons Bangkok and Capella Bangkok hotels. Mr Taechaubol said: “The Four Seasons Hotel will include more than 300 rooms and suites offering world-class amenities, stunning new spaces for events and meetings, and revelatory dining in a low-rise, low-density design linked by a series of shaded squares and lush courtyards. The Capella is ultra-luxurious, just 100 suites and designed as a spectacular showcase of the river in all its grandeur.”

“After undertaking extensive relocation efforts and securing one of Bangkok’s last remaining undeveloped large parcels of riverside land in the CBD, our aim is to create a meaningful luxury experience unmatched in the market – by that I mean luxury that stands for something, sets a new benchmark and serves a purpose; luxury with a sense of place, a place in history and an important part to play in illuminating the future.”

“Our contribution to the revival of the Chao Phraya River and skyline of Bangkok reflects our passion and respect for our city’s rich culture and history and our desire to see it recapture its renown as one of the greatest urban waterways in the world.”

The master planners and architects for the entire project, Andy Miller and Richard Scott, who head Hamilton’s International after spending most of their careers under Sir Norman Foster, have broken new ground with their floor plate design, consisting of three interlocking squares and effectively turning each of the 73-storey tower’s 300 residences into corner units, thus giving them almost double the view planes afforded by conventional condominium designs.

Miller was the project lead on the HSBC’s iconic Hong Kong headquarters, while Scott was the lead on the design of Hong Kong International Airport. Interior design is led by Gerry Jue, principal of BAMO, based in San Francisco, the man responsible for some of the most loved Four Seasons hotel interiors created in recent years.

Country Group Development’s Head of Sales for the Four Seasons Private Residences Bangkok, Ms Kitima Kritiyachotipakorn, will be in attendance for the duration of the private viewing weekend.

“It’s very exciting to be launching a project with this kind of pedigree and truly unique, never to be repeated location in a market like Hong Kong, which we expect to be one of the places of strongest interest in the Four Seasons Private Residences,” she said.

“It’s an iconic project in many ways, not least being at once the world’s biggest Four Seasons private residence development, and also the only waterfront Four Seasons Private Residences in Asia.”

She said for interested prospects and investors not in Hong Kong during the weekend of private viewings, subsequent private presentations at the prospect’s convenience could be arranged.

Chao Phraya Estate is due for completion at the end of 2018. The Four Seasons Residential Sales Gallery is situated on the development site at Soi Charoen Krung, 64 Charoen Krung Road, Yannawa Sathorn. For further information, please visit chaophrayaestate.com

About Four Seasons Hotels and Resorts
Founded in 1960, Four Seasons continues to define the future of luxury hospitality with extraordinary imagination, unwavering commitment to the highest standards of quality, and the most genuine and customized service. Currently operating 96 hotels and residences in major city centres and resort destinations in 40 countries, and with more than 60 projects in development, Four Seasons consistently ranks among the world’s best hotels and most prestigious brands in reader polls, traveller reviews and industry awards. For more information, visit fourseasons.com. For the latest news visit press.fourseasons.com and follow @FourSeasonsPR on Twitter.