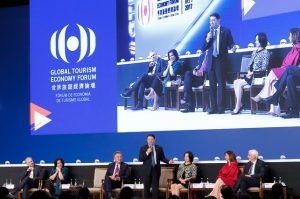 Macao (Macao SAR) – October 17, 2017 (travelindex.com) – The sixth edition of the Global Tourism Economy Forum (GTEF) unfolded an opening ceremony, themed panel sessions, tourism presentations and business networking activities in its first-day program today (16 October), having invited over 60 distinguished speakers from more than 20 countries and regions to present their insightful perspectives on various discussion topics. The first-day program includes two discussion sessions namely a special keynote on the topic “A Journey Well-Traveled” as well as the signature session held in collaboration with UNWTO — Face to Face, Ministers and Private Sector CEOs.

The special keynote themed as “A Journey Well-Traveled” paid a tribute to outgoing Secretary-General of UNWTO. Presented by Chairman Emeritus of TUI Group, Michael Frenzel, the special session lined up distinguished speakers including President of the Board of Petra National Trust, Princess Dana Firas; Chief Executive Officer of Pacific Asia Travel Association, Mario Hardy; Vice Chairman and Secretary-General of GTEF, Group Executive Chairman and Managing Director of Shun Tak Holdings Ltd., Pansy Ho; Chairman of World Travel and Tourism Council, Gerald Lawless, and President of Bahrain Authority for Culture and Antiquities, Shaikha Mai Bint Mohammed Al Khalifa. Secretary-General of UNWTO, Taleb Rifai, who will finish his term of office at the end of 2017, was honored by the guest participants for his work and legacy at the helm of the organization that helped to place tourism and sustainable development of the industry at the centre of world’s economy. During the session, participants shared their views about Rifai’s working style from the heart that inspired many throughout the world, with Pansy Ho recalling how his support was instrumental to the creation and impact of GTEF right from its inception.

Face to Face, Ministers and Private Sector CEOs:
Held in collaboration with UNWTO, the Forum’s signature session Face to Face, Ministers and Private Sector CEOs once again brought together ministerial officials and industry leaders from worldwide to engage in a direct dialogue on the topic “Embracing Regional Collaboration for Collective Growth”. The global exchange of people and ideas continues to be driven by strong proponents of free trade and cross-border cooperation. In light of this, China’s Belt and Road Initiative has led to the establishment of various collaborative economic frameworks including the “16+1” with the Central and Eastern European Countries. These frameworks will serve as the foundation of future regional alliances, and put the topic of tourism economic cooperation into the spotlight. In this session, the speakers explored how regional and inter-regional collaboration can create positive developments across geographic borders.

The thought-provoking discussion in the aforementioned session features the strongest speaker lineup ever, including ten ministerial and governmental officials from countries across Asia and Central and Eastern Europe as well as six private-sector leaders. The speakers include Secretary-General of UNWTO, Taleb Rifai; Minister of Foreign Trade and Economic Relations of Bosnia and Herzegovina, Mirko Šarović; Deputy Minister of Tourism of the Republic of Bulgaria, Milko Teofilov; Minister of Tourism of the Kingdom of Cambodia, Thong Khon;State Secretary of the Ministry of Tourism of the Republic of Croatia, Frano Matušić; Ministerial Commissioner for International Tourism Relations, Ministry of Foreign Affairs and Trade of Hungary, Emese Boros;State Secretary of the Ministry of Economics of the Republic of Latvia, Juris Stinka; Chairman of Tourism Malaysia, Siew Ka Wei; Deputy Minister of Ministry of Tourism of Romania, Cristina Ionela Tărteață;Deputy Minister of Trade, Tourism and Telecommunications of the Republic of Serbia, Renata Pindžo; Chairman and Chief Executive Officer of Dubrovnik Pearl, Vicenco Blagaic; Chairman of the Board of Directors and Chief Executive Officer of Tatry Mountain Resorts, Bohuš Hlavatý; International Councillor for Hungary of Skål International and Member of Premium Incoming DMC, Péter Jávorkai; Chief Executive Officer of Budapest Airport, Jost Lammers, as well asChief Executive Officer and President of the Management Board of LOT Polish Airlines, Rafał Milczarski. The session was moderated by Founder and Managing Director of CACHET CONSULTING and Special Advisor to the Secretary-General of UNWTO, Anita Mendiratta.

Lead speaker, Secretary-General of UNWTO, Taleb Rifai remarked that “travel can make one become a better person. The more people travel, the better the world become.”

Release of the fourth Asia Tourism Trends report:
The second-day program of GTEF 2017 is highlighted by the presentation of the fourth UNWTO/GTERC Asia Tourism Trends, a joint research report produced by UNWTO and the Global Tourism Economy Research Centre (GTERC). The report presents tourism trends and outlook of the region, and highlights the importance of regional collaboration to the adoption of 2017 as the International Year of Sustainable Tourism for Development by the United Nations.

Six themed panel sessions and workshops:
Coupled with the above highlight, three inspiring panel sessions are encompassed in the second-day program of the Forum. The session titled “Promoting a Shared Vision through Regional Collaboration” will discuss the impact of three influential alliances on their regional tourism economy. In the session titled “Driving Tourism Economic Growth through Innovation and Technology”, industry leaders will discuss how to create innovation and technology solutions to meet travelers’ needs and enhance their overall trip experiences. In the session themed as “The Greater Bay Area – Visionary Collaboration in the Making”, government officials and scholars will jointly explore the role of the Greater Bay Area in this region’s tourism economy and in the global tourism economic supply chain.

In addition, there are three concurrent sessions and workshops themed as “Consumption Upgrade & Market Strategies”, “World Heritage & Regional Cooperation” and “Building a Brighter Future for Cities through Collaboration”, outlining directions and a comprehensive picture of future tourism development for delegates. Through different sessions and networking activities, the Forum will continue to offer unrivalled opportunities for business matching and networking among delegates from China and across the world.

Besides the above, the Forum encompasses activities specially presented by the Partner Province and the Partner Region, including the “Fascinating Guizhou – A Heaven of Myriad Mountains” Presentation Lunch, and the session themed as “Spectacular, Fun and Prizes – CEEnter: Central and Eastern Europe”. Through an exhibition of photos, the former showcased the splendid culture and landscape of Guizhou to Forum delegates, while the latter presented the destination glamour of the 16 Central and Eastern European Countries.

For more information about the Forum, please visit www.gte-forum.com and stay tuned for event updates via official social media channels of GTEF.