Happiness and Joy in Thainess Style 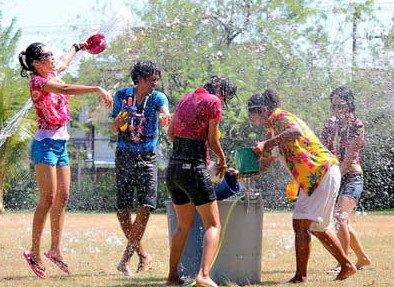 Bangkok (Thailand) – April 15, 2015 – The Tourism Authority of Thailand (TAT) and the Bangkok Metropolitan Administration yesterday officially opened the ‘Songkran Festival: Happiness and Joy in the Style of Thainess’, which is being held from 12-15 April, 2015, from 16.00-21.00 hrs. at Sanam Luang. The four-day event emphasises centuries-old rituals and traditions, as well as shares the Thai way of happiness through daily cultural performances and Thai traditional dance flash mob.

Bangkok’s Songkran celebration started in early morning of 12 April, 2015 with a procession to bring the highly-revered Phra Phuttha Sihing image from the National Museum to be installed at Sanam Luang for the public to pray to – this tradition only takes place once a year. The public will also have the chance to purify Phra Phuttha Sihing image as well as nine other sacred Buddha statues from famous temples in Bangkok with scented water – a unique ritual which for centuries have celebrated the significance of water in Thai culture and society as a symbol of purity, prosperity and happiness.

The official opening ceremony took place in the afternoon with Tourism and Sports Minister H. E. Kobkarn Wattanavrangkul and Bangkok Governor MR Sukhumbhand Paribatra jointly sprinkled water from a gigantic bowl onto local and international revellers as a symbol of giving their New Year blessings. This followed by a Thai traditional dance flash mob to promote the essence of Thainess and the spirit of Songkran.

On 13 April, a mass alms-giving ceremony to 189 monks took place in the morning to mark the beginning of the Thai New Year. Throughout four days, Bangkok’s Songkran Festival: Happiness and Joy in the Style of Thainess at Sanam Luang will be filled with joyous and meaningful traditions and ceremonies that reflect the unique essence of Thainess.

Local and international revellers can take part in the daily ritual to purify Buddha images with scented water, and to join the Rod Nam Dum Hua ritual or the custom of pouring scented water on the hand of elders (people above 60 years old) to show respect and seek their New Year blessings. Everyone is also invited to enjoy cultural performances, such as, Thai classical mask dances, puppet show, and ancient Thai martial art – Muay Tab Chak, as well as taking part in the good-natured water play of the Songkran Festival.

In addition, everyone is invited to visit temples on Rattanakosin Island or Bangkok’s old quarters, and also to join sub-district Songkran Festivals; such as, in the Wisut Kasat and Bang Lampu areas. Any visitors who pay homage to Buddha’s relics at all five temples of Wat Phra Chetuphon (Wat Pho), Wat Bovorn Nivet, Wat Sraket, Wat Mahanparam, and Wat Mahathat, and get their leaflets stamped, can claim a special gift at Sanam Luang, where authorities are giving out a total of 700 pieces of gift item per day.

Mr. Sugree Sithivanich, Deputy Governor for Marketing Communications of the Tourism Authority of Thailand, “The Songkran festivity in Bangkok is part of the nationwide celebration to mark the Thai New Year. TAT would like to encourage tourists and travellers to join in the centuries-old traditions and ceremonies of the world’s most unique water festival up and down the Kingdom of Thailand.”