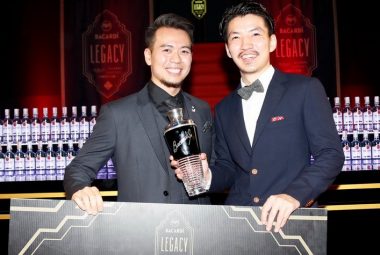 Bangkok (Thailand) – March 21, 2017 (travelindex.com) – The bartender from Bronx Liquid Parlour won the Bacardi Legacy Cocktail Competition 2017 Thailand Grand Final and will be the representative of Thailand to fight in the honorable stage with the competitors from around the world in Berlin, Germany, from 18th – 24th May. Bacardi (Thailand) Co., Ltd. held Bacardi Legacy Cocktail Competition 2017 Thailand Grand Final consecutively for the 4th time. This was the challenging competition for professional bartenders who were ready in all respects to present their potential, skills, and creativity in creating their own cocktails to be witnessed by people around the world.

The result was that the Japanese bartender, Hideyuki Saito, from Bronx Liquid Parlour won the honorable award of top bartender of Thailand successfully and he will be the representative of Thailand to attend the competition in the event of Bacardi Legacy Global Cocktail Competition which will be held from 18th – 24th May, 2017, in Berlin, Germany. The event was attended by the honorable guests including the mass media to cheer at Chareonkrung Room, O.P. Place Shopping Center.

Suraglin Limparatkanjana, Brand Manager of Bacardi (Thailand) Co., Ltd, said, “I would like to congratulate Hideyuki Saito from Bronx Liquid Parlour who initiated the cocktail “El Blanca” and won this award successfully to be the representative of Thailand to travel to compete in the event of Bacardi Legacy Global Cocktail Competition. Moreover, Bacardi also supported him throughout the year for the progress in the career and for achieving the goal as well as granting the chance in travelling and working with the important persons in the field along with presenting the cocktail which is the “legacy” in the world leading bars.

Hideyuki Saito, the winner bartender of Bacardi Legacy Cocktail Competition 2017 from Bronx Liquid Parlour who initiated El Blanca said, “I was very glad and proud to be able to win this award successfully. This was my 2nd time to attend this stage competition. Throughout the competition duration, I had to practice and develop this skills as well as learning new technics. Moreover, I had to learn about marketing to know how to promote the special-recipe cocktail at my bar or at other bars as well as the social media. I received a lot of advices which I have used for improving and developing myself to be better until winning this award successfully. I would like to express my appreciation to Bacardi for arranging the good activity like this for encouraging and elevating the Thai bartender field to participate in the world competition as well as elevating the standards of Thai bartender to reach international level. Finally, I would like to express my appreciation to all encouragements and motivations. I promise that I will be hard-prepared to be the representative of Thailand to show the potential in the international stage in Berlin, Germany, and I will take the award for all of you. Please encourage me.”