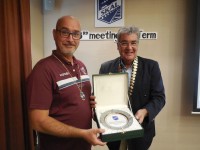 Krabi (Thailand) – January 4, 2016 (travelindex) – The Malai Sakolviphak Award for 2015 has been presented to the founding members of the newly-formed Skal Club in Krabi, southern Thailand. The award is made in memory of Mr. Malai Sakolviphak, a well-known and highly respected tourism industry figure in Thailand who passed away in 2011 after many years of distinguished service to Skal at local and international level.

The award was presented to hotelier George Kenton, President of Skal Krabi, by Dale Lawrence – the organisation’s National President for Thailand.

Dale Lawrence said that the formation of a new Skal Club in Krabi was compelling evidence that there is still a demand amongst travel, tourism and hospitality professionals for an organisation that combines B2B networking opportunities with a variety of social events. The award was received by George Kenton on behalf of the local organising committee in Krabi that also comprised Jana Kenton, Ivan Berthelot and Mikko Kataja.

The club has expanded substantially since its formal launch in July 2015 and is expected to attract more than 40 members in 2016.

* Until 2015 the award was in the gift of the President of the Skal Club in Bangkok but National President Dale Lawrence has widened the scope of the award to embrace all Skal clubs throughout the country.