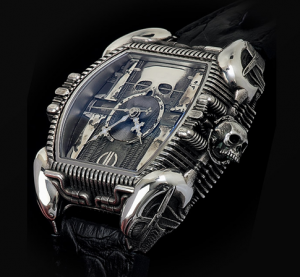 Bienne (Switzerland) – October 20, 2017 (travelindex.com) – Swiss watch brand Strom today presents the “In Memorian HR Giger” watch, one of the final projects on which the artist worked before his death in 2014. A veritable “wrist sculpture”, the timepiece features HR Giger’s legendary biomechanoid creature. Acclaimed for his “fantastic-realism” works, HR Giger shot to fame with his creation of the monster in Ridley Scott’s 1979 film, Alien, for which he received an Oscar in the “Best Visual Effects” category the following year.

Deeply saddened by the death of this man, who had also become his friend, Daniel Strom waited three years before presenting the watch that they had created together, named “In Memoriam HR Giger” in tribute to him. For the official launch, he has chosen the HR Giger Museum in Gruyères, which features a sculpture of the biomechanoid creature emblematic of HR Giger’s work proudly displayed at the entrance.

Alongside the artist’s widow, Carmen Giger, the Bienne-based watchmaker unveiled this exceptional watch, of which just 99 pieces have been produced. Sculpted in the silver case, the elongated skulls of the Cyborg creature extend from the lugs, while its body parts are etched into the case middle.

The entirely hand-worked, in silver casted dial was inspired by another of HR Giger’s works, and one of his best-known: the “ELP II” canvas (work no. 217) painted with an airbrush in a single night. A work that was stolen in 2005 and never returned to its rightful owner, despite the presence of tangible clues. For Daniel Strom, with its lively, sensual mouth, the skull in the painting symbolises the ephemeral nature of existence – a subject already explored in one of the preceding creations in his Agonium collection, of which the “In Memoriam HR Giger” is the sixth opus.

Crowdfunding to support the brand’s development
In the presence of the journalists attending the event, Daniel Strom also mentioned the fundraising started to finance the development of his family brand founded in 2001, up until now entirely self-funded. After the first phase which enabled him to collect more than CHF 700,000 from clients and friends in just a few months, he is opening his share capital to the public to achieve his CHF 2 million target.

To enable fans of the brand and other aficionados of Swiss watchmaking who may not have the means required to contribute to the development of the Maison, various blocks of shares are offered from as little as CHF 1,000. Developments planned at the end of this crowdfunding venture focus on distribution in particular – as much through the traditional network as through the implementation of new concepts – as well as on the production and visibility of the brand.