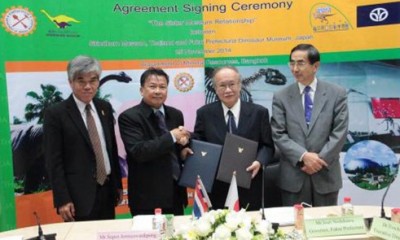 Under the agreement, both museums agreed to establish a Sister Museum Relationship that will enable them to mutually exchange academic knowledge and share experiences on the development and management of dinosaur museums. Both institutions will also cooperate on the purposes of study and research on geology and palaeontology, preserving the fossils as references, and geological tourism.

Sirindhorn Museum is the first dinosaur fossil museum in Thailand. It was established in 1995 due to the discovery of dinosaur fossils at Wat Sakkawan, Sahatsakhan district, Kalasin. The fossils found here are prime evidence for study and research and can be used as world-class references since they are new species and kinds, according to Thailand’s Department of Mineral Resources.

The Museum has three main parts: the dinosaur fossil site museum, the fossil storage and research building, and the permanent museum building. It is located about 27 km north of Kalasin town centre.

Mr. Thawatchai Arunyik, Governor of the Tourism Authority of Thailand (TAT) said, “For many years, the Sirindhorn Museum has played a pivotal role in the study and research on geology and palaeontology, and geological tourism. Each year, tourists travel from afar to see the many dinosaur fossil exhibits here. This agreement to establish a Sister Museum Relationship with the Fukui Prefectural Dinosaur Museum will certainly help enhance the awareness of the museum and the people’s interest in geological tourism, resulting in more tourism spending in Kalasin.”