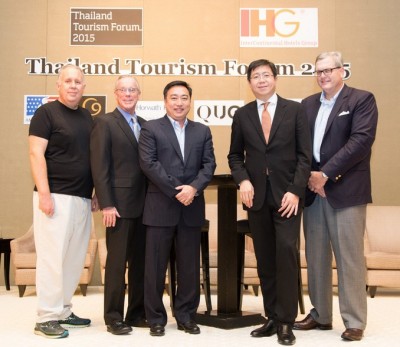 Bangkok (Thailand) – January 28, 2015 – Thailand’s tourism industry has turned the corner after a very difficult 2014, bouncing back in the fourth quarter with strong growth, according to data released exclusively at Thailand Tourism Forum 2015 by STR Global.

Held at InterContinental Bangkok and now in its fourth year, a record number of delegates totalling over 500 from throughout Asia gathered to gleam insights from industry leaders on Thailand’s tourism industry at the leading hospitality event.

The positive news for the industry was welcomed as STR’s Area Director for Asia Pacific Jesper Palmqvist revealed the staggering decline for most of 2014 with year-over-year (YoY) occupancy falling by -11.3%, mostly driven by Bangkok, which saw a decline YoY of -16.2%. This is against a backdrop of almost half the year at -20% and worst months where it was over 30% down.

However, recovery started to emerge late Q3, and in Q4 numbers really turned around for Bangkok. After the dismal start to the year, RevPAR (Revenue Per Available Room) increased by +2.5% YoY in the last quarter.

Occupancy in December for Bangkok was one of the highest ever recorded by STR Global since 2000 and when comparing quarters, Q4 2014 showed the best occupancy Bangkok has seen since 2006. Moreover, RevPAR was the second best Q4 for the last decade suggesting that six to nine months is the new recovery time norm for Bangkok.

Delegates also heard the story of Thailand’s key resort markets, where Phuket occupancy fell by -5.7% YoY and Koh Samui decreasing by -1.6%. It was positive news for Chiang Mai where occupancy decreased -4.2%, but RevPAR growth was positive, driven by upward ADR movement. Hua Hin was also able to hold rates up well but Pattaya suffered more, due to a -10% decline in occupancy YoY.

About the Thailand Tourism Forum:
Thailand Tourism Forum is an annual event held every January and organised by AMCHAM Thailand and leading hospitality consultancy C9 Hotelworks. Now in its fourth year it attracts leading industry speakers and a growing number of delegates from around the region, topping 500 in 2015, as it establishes itself as the leading hotel business event of the year in Thailand.