Up Up and Away on Thai Airways’ Brand New A350 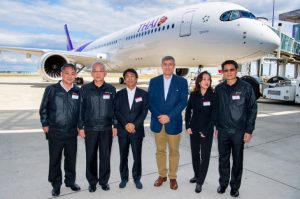 Toulouse–Blagnac (France) – October 5, 2017 (travelindex.com) – Fear of flying? Not me. I am more of a plane-spotter and sometimes I like to drop big words like propeller, airframe, fuselage and fly-by-wire. Linen, wood and wires that’s what Wright brothers rickety flying machine named Flyer was made of. But on that cold December day 1903 in Kitty Hawk, North Carolina it did lift-off and fly 12 seconds a distance of 67 meters (a run shorter than the wing of new the Airbus A350).

After a memorable Bangkok-Frankfurt flight on the Thai Airways super jumbo A380 in the Royal Silk Class, THAI’s business class. “Smooth as Silk” in every sense from the seamless service, in-flight entertainment, delectable cuisine, superb wine assortment and the spacious full lie-flat seat.

Thai Airways A380 fleet consists of six double-decker A380s. TG flies them on premier routes from Bangkok to Tokyo, Osaka, Hong Kong, London, Paris and Frankfurt. Our next leg Toulouse. Lufthansa (LH) service 1 hour 20 minutes aboard A320 Airbus narrow-body cash cow. Every two seconds an A320 lands on some runway on our planet.

Moments after we touch down at Aéroport de Toulouse–Blagnac (TLS) on starboard side I spot a huge, white hilarious guppy looking airplane. It’s the Beluga the whale-shaped super transporter specifically built to carry the oversized A380 parts from the Airbus plants in the UK, Spain, Germany for final assembly in Toulouse, France.

This is a whistle-stop tour. However, after the city-walk we have time “at leisure” which is much appreciated by the Thai female journalists who shoot straight for Hermès, Louis Vuitton and Galerie Lafayette department store. The compulsory “Le Shopping”

Following day under cobalt blue skies – Airbus HQ. The company, previously called Sud Aviation and Aerospatiale was born 1970. Today a European multinational corporation that designs, manufactures, and sells civil and military aeronautical products worldwide. Staff: 55,000 around the globe. Suppliers: 7,700. Airbus’ comprehensive product line boasts of highly successful aircraft families ranging from 100 to more than 600 seats. From the smallest A300 to the biggest A380. Including the new technologically advanced, twin-engine Airbus A350 XWB mid-size, long-range passenger aircraft.

Vanessa Gerencseri A350 Marketing Manager “A350 XWB will shape the future of air travel. We have currently 848 orders to airlines in the Americas, Europe, Asia & Pacific and Africa & Middle East. 84 aircraft flying with 12 airlines and more than 46,000 flights to date or 11 million passengers have flown it” says Vanessa Gerencseri. She adds, “The A350 XWB is powered by two state-of-the-art massive Rolls-Royce Trent XWB engines. The world’s most efficient large aero-engine flying today”.

Here are some fast facts about the new 350 XWB. First of all “XWB” – stand for Extra Wide Body. The cabin brand Airspace by Airbus providing more room, higher ceiling, and the largest overhead storage bins. More comfort in business and economy class and a new Innovation: “Cabin mood lighting” to reduce jet lag. Furthermore, the A350 boasts 25 percent lower fuel burn, and lowest twin engine noise level of all aircrafts. And world’s largest carbon-fibre wing panel, constructed from 53 percent composite materials which makes the plane extra light. Note, also the cool A350 trademark winglets that save kerosene by reducing drag while also lowering noise and carbon dioxide emissions. Aerodynamics inspired by nature or the flight of the eagle.

Onwards. From marketing to assembly. The newest Airbus final assembly line (FAL) inside the Toulouse airport In the towering, cavernous hangars, the size of 300 tennis courts where huge Airbus airliners are assembled including the join-up “marriage” of fuselage and wings. I notice that everything is XXL, super sized, super clean and so quiet. Here safety is paramount. I see bright yellow warning signs “FOD!” Foreign Object Discharge or “Do Not Drop Stuff On The Factory Floor!” Conceived with eco-efficiency in mind, this streamlined aircraft assembly process for the A350 allows teams to work in parallel, reducing the time from start of final assembly to aircraft delivery by 30 percent.

Last day, the day of the “Ferry Flight”. Airbus delivery center. Like a swank First Class lounge with catering and an observation deck. Outside on the tarmac THAI’s sparkling new sixth A350 XWB has been royally bestowed the name PHU PHA MAN aircraft registration: HS-THB (“Hotel Sierra – Tango, Hotel, Bravo”) is now ready in TG livery for the flight to Suvarnabhumi (BKK). For the eleven hour flight to Thailand Khun Khun Itt Sirisawat, the THAI chief technical pilot for A330/350 will be the commanding officer on the ferry flight. “Most of the pilots that fly the A350 also love it. The cockpit is wider and has a lot of space. This is the most beautiful cockpit in the world right now compared to other aircraft,” says Captain Sirisawat.

THAI’s A350 XWB offers outstanding two-class service. Royal Silk Class with Business Class seats arranged four abreast in a 1-2-1 configuration for a total of 32 seats, with a width of 21 inches which can be adjusted to 180 degree recline, and allowing individual easy access to entry and exit from any seats without disturbing other passengers. Each seat is fully equipped with a 16 inch touchscreen with Wi-Fi and the latest in-flight entertainment system. Economy Class seats are arranged nine abreast in a 3-3-3 configuration for a total of 289 seats, with a generous 32-inch pitch and 18-inch width. In-flight entertainment boasts 11 inch touchscreen and Wi-Fi connection. Both Business Class and Economy Class passengers enjoy wider. More comfortable seats and with more leg room. By the way. Airbus has it but Boeing does not have it – the tail mounted external camera. Who needs in-flight entertainment when you can watch the world below in-real time. High definition, too.

Even if you’re a not a plane spotter next time you see a big, long and sleek airliner on the tarmac of an commercial airport. And if it’s got that cool raccoon mask windscreen, and those unique eagle inspired wingtips.

Yes, it’s the new Airbus A350 XWB-900. Get a boarding-pass and a great in-flight experience awaits you.